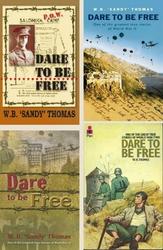 
One of the most famous and greatest true stories of World War II has been finally published in Greek. The Adventure of a young New Zealand Officer who fought bravely in the battle of Crete in 1941, but captured and shipped by the Germans to the Greek mainland as one of their prisoners. Despite being severely wounded he attempted several dramatic escapes, including being carried out of the POW Nazi camp in a coffin.

He finally succeeded in a spectacular escape, and made his way from Salonica across Northern Greece to Mount Athos, a rocky peninsula populated for centuries by Orthodox Christian Monks. There he evaded capture with the help of the monks for over a year, before finally navigating his way through winter seas to Smyrna and then to Syria where he met his NZ Battalion and his own brother.

One of the great escape narratives, sold more than 500,000 copies so far, enriched in Greek with more clues and notes from George G. Spanos who followed and researched Thomas' adventurous pathway while adopting his story in Greek.